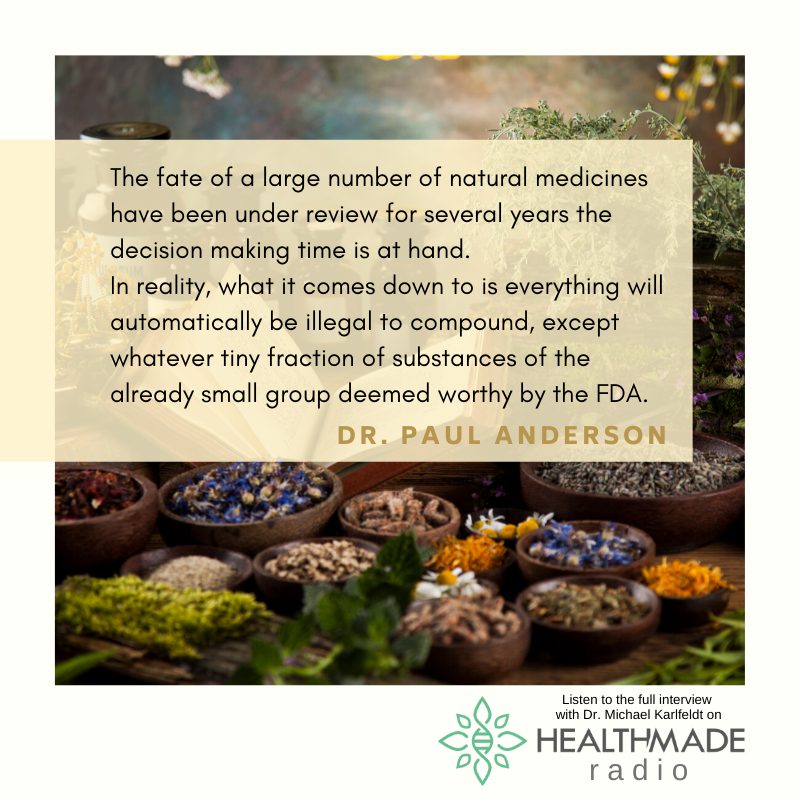 TAKE ACTION! The fate of a large number of natural medicines is under review by the FDA. COMMENT TODAY TO PROTECT YOUR ACCESS TO NATURAL SUBSTANCES used for 100’s if not 1000’s of years. Comment Period Closes December 5th.

This upcoming decision to be made by the FDA this January could take away public access to natural substances that have been providing healing to a significant number of people, specifically those dealing with cancer and other chronic illnesses. Dr. Michael Karlfeldt and Dr. Paul Anderson discuss what we can do to protect our access to things that are saving people’s lives. Dr. Anderson has been testifying and attending hearings at the FDA, where the fate of a large number of natural medicines have been under review for several years. December 5th is the last opportunity for public comment.

“In reality, what it comes down to is everything will automatically be illegal to compound, except whatever tiny fraction of substances of the already small group deemed worthy by the FDA.”

TAKE ACTION! The fate of a large number of natural medicines is under review by the FDA. COMMENT TODAY TO PROTECT YOUR ACCESS TO NATURAL SUBSTANCES that have been used for 100’s if not 1000’s of years. Comment Period Closes December 5th .https://naturopathic.org/page/LegislativeActionCenter#/

The Impact on Those with Cancer Seeking Treatment

Dr. Karlfeldt: Medically, there are a minimal amount of options for those with Cancer. If the medical community had solved Cancer it wouldn’t be any need for any other therapy. But currently, Cancer is one of the leading causes of death. One of the four people is going to die from Cancer.
One natural substance that has been used effectively against cancer when all other treatment has failed is curcumin. It’s one of 240 substances on the list to become prohibited to use by compounding pharmacies.

How Did This All Come About?

Dr. Anderson: The process started the FDA asked for the natural health community that uses these things and the pharmacies that make them nominate substances.  This is because the FDA didn’t know what was being made. It seemed pretty innocuous back then.

So the community nominated about 300 substances, many of them natural substances or compounds that are either nutrients or herbs or parts of herbs or even mineral and vitamins, amino acids that are in our body already.

Of the 300 the FDA looked at them and basically chose 80 of the 300 to have hearing on to determine their scientific validity. The FDA then determined that everything else, about 240 substances, had no merit. They did not have a scientific review hearing. These substances included things such as Alfalfa, Aloe, Ginkgo, Green Tea, Nettle leaf and 235 other natural substances that will not get a review hearing. They refuse to hear about the benefits of these natural substances. The FDA says they should be illegal to the compound.

The Fate of Curcumin (and the other 240 natural substances)

If the FDA process is enacted as a federal rule, these substances will automatically become illegal to compound, without even having had a hearing.  Comments close on December 5th.
Take a moment to comment.

Dr. Karlfeldt: A natural substance like curcumin is giving an option for people over other therapies that have failed and now FDA is wanting to take that substance away from public access.

Dr. Anderson: Curcumin. I think it’s a good example because almost everybody’s heard of curcumin at this point.  There is something like 50,000 scientific papers about curcumin as medicine and many of them address cancer or inflammatory diseases etc.

What Substances are Affected?

This is abbreviated list comes from the interview with Dr. Anderson with  Journal of Restorative MedicineLactobacillus acidophilus, alfalfa, anise seed, certain types of copper, certain types of magnesium, a lot of minerals, a number of herbal substances that might be used in a compounded sense, and a whole host of things nominated by pharmacists that aren’t used as medicine but are used as binders or excipients (such as powdered milk) and would become illegal according to this list for a pharmacy to use.

In reality, what it comes down to is everything will automatically be illegal to compound, except whatever tiny fraction of substances of the already small group deemed worthy of hearings that make it to the FDA “yes” list!
This action by the FDA would not affect your supplements supplier where you buy an oral pill. It would affect every other form that could be made by a legal pharmacy.

Is the FDA protecting us from these unproven agents?

Dr. Anderson: So the process is really in my mind very unfair, and I’ve been a part of the process since the beginning. So that people know I’m speaking from primary experience. I helped write some of the testimony initially for all these substances. And then I’ve gone back to testify to the FDA over the last four years.

So it’s really frustrating. As a clinician, it doesn’t make logical sense that pharmacy licensed by the state board of pharmacy and regulated through FDA rules and USP rules would seem to be the safest place to get something made it, so I needed something specific.

And what date they would not be able to have it will be illegal for that pharmacy to help you. You would think that if you had really good science and you had an excellent argument, you could prevail and win. But that is not the case.

I’ve been at the hearing, and what happens it’s basically if the FDA does not want to a substance ( regardless of the science) to be available for compounding, then it won’t pass the hearing.

The FDA board has its mind made up prior to the hearings and do not change regardless of what science and evidence are presented. The FDA can (and does) refuse to acknowledge the evidence and ignore the published science if it would change their decision.

Isn’t it a Matter of Science?

Dr. Anderson: It is surprising and less you’re in the business of looking up research about nutrients and herbs and how much resources and references are available in any other natural things like licorice extract it’s been around forever with studies from all over the world.

However,  the way the FDA hearings are set up, if these substances do not have some very clear medical indication for which they are the only treatments, the FDA essentially tells the committee that they should not approve it. The end goal is regulating the use of natural substances out of existence. Is this about taking away competition from the drug side? Dr. Anderson: The FDA tribunal said at the hearings, numerous times that they trusted the pharmaceutical companies more than they trusted the natural health community. A pharmaceutical company can’t make money on any natural substance.

Let’s talk again about curcumin. It is a natural substance the pharmaceutical industry can’t patent that. So it has to be altered into a chemical – then it becomes more dangerous, more regulated but more profitable.

Dr. Anderson: There is a perfect example LIPOCURC. At the same time, we were working with the NHS integrative cancer research, a pharmaceutical company was running trials on an altered form of curcumin. We were using intervenous curcumin with an FDA registered pharmacy infusing it, without changing the molecule. A pharmaceutical company changed the curcumin molecularly so they could patent it. When we received a safety paper from their trials, we saw that they had issues at high doses. With the natural substances, we used the pathologist remarked that the blood looked better after the IV. The pharmaceutical verision caused damage to the blood.

No pharmaceutical company is going to make or sell a natural substance because it can’t be patented, even if it benefits the patients.

What Can I Do?

Your comments may not slow down the process now but will give the lawyers ammunition as they appeal the FDA decision. If you are a practitioner. Comment. If you are a patient using one of the 300 substances. Comment. Even if you don’t use a listed product now – Comment.

Several partial quotes came from the excerpt of an interview with Paul Anderson, ND on the FDA’s recent stance on compounded medicine as published in the Journal of Restorative Medicine, Volume 8, Number 1, 4 January 2019, pp. 1-5(5).
https://todayspractitioner.com/aarm/exclusive-interview-with-dr-paul-anderson-the-fda-and-the-fate-of-compounded-medicines/#.Xdr_NehKiUk
Dr. Paul Anderson, N.M.D., is a naturopathic medical doctor and Medical Director and Founder of the Anderson Medical Group. His facility Advanced Medical Therapies is the first of its kind in the U.S., offering therapies in multiple modalities based on his over two decades of research and patient care.