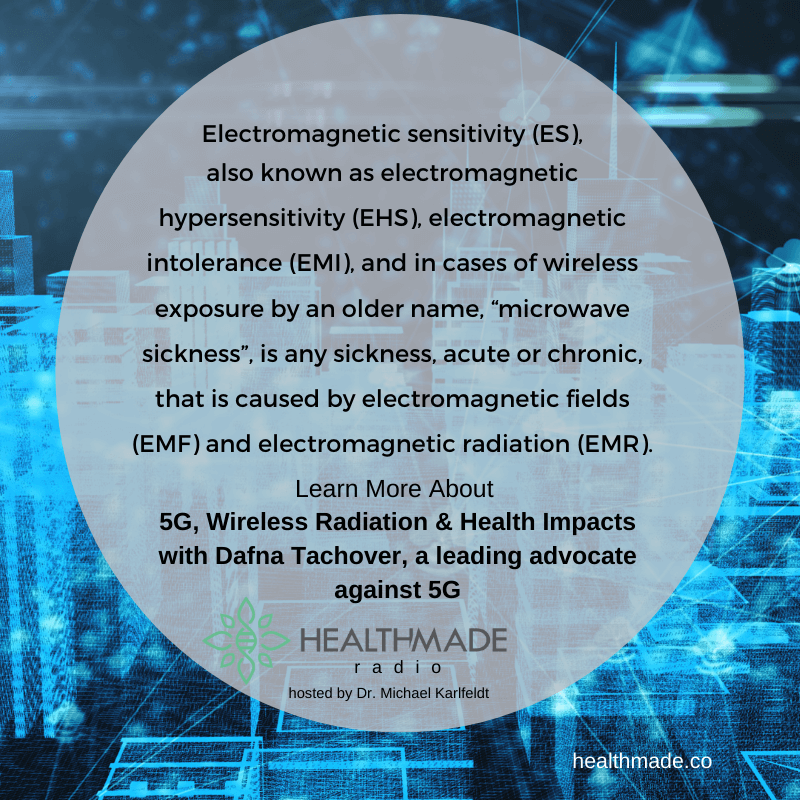 Dafna Tachover, a leading advocate against 5G, an expert on the health effects of wireless technology radiation, and senior attorney and director of the 5G program at Children’s Health Defense, joins Dr. Michael Karlfeldt to share her expertise on wireless radiation and its impact on the body.

When people with electromagnetic sensitivity (ES), are exposed to EMF and EMR from wireless and electrical sources like cell phones, Wi-Fi, cell towers and antennas, tablets, cordless phones, wireless “smart meters”, powerlines, appliances, and imbalanced home wiring among others, they experience signs and symptoms of adverse health effects.

After she became ill from electromagnetic sensitivity in 2009, Dafna applied herself to discovering all she could about the wireless technology she once depended upon and admired. With the help of her then MD/Ph.D. husband, she read hundreds of papers and researched numerous documents testifying to the harmful biological effects of radiofrequency and microwave radiation, and spoke to hundreds of people who had also been injured.

Dr. Karlfeldt: It seems like the world cannot exist without all this technology. We are experiencing more and more chronic conditions and diseases, and everything is getting worse and worse in all these areas. Do you feel all this technology has an impact on the body?

Dafna Tachover: Yes, there is scientific evidence that this wireless technology is affecting humans. It might not be the cause of all the disease, but it is definitely a contributing factor.

Tachover shares findings from many thousands of studies, pointing out how science is manipulated. She explains, “the evidence is beyond clear that wireless is harmful” and why, even though 5G is a new technology, there’s no doubt it is harmful as well. 5G Communication with Cellular Networks 5G will use higher frequency waves, starting in the range of 28GHz to 39GHz. These higher frequency waves, known as millimeter waves, degrade over a shorter distance than 3G and 4G frequency waves, which are lower on the GHz spectrum. Many more cell towers will have to be placed at a closer radius to one another to maintain the network. This will increase the overall density of the electromagnetic radiation experienced by our planet.

We Are The Evidence founder Dafna Tachover is an attorney both in New York and in Israel who received her degree in the UK. She also has an MBA and has had a diverse international legal and business career. She gained a technical understanding of wireless networks and infrastructures as a communication and computer officer in the Israeli Defense Forces where she was the commander of the computer center for their Operations Center and Headquarters.

In 2009, she developed electromagnetic sensitivity from wireless technology radiation. Since then, she has dedicated herself to exposing the epidemic of sickness caused by this technology: protecting the rights of the injured, eradicating the misrepresentation that wireless technology is safe, and pursuing those who betray the public’s trust. She has also been fighting against the deployment of Wi-Fi in schools. Her work includes public speaking engagements, educating the medical profession, generating media initiatives and interviews, lobbying, consulting, and litigation. She is one of the leading global advocates on this topic. Since 2012, she has been reporting about her work in a blog: EHS Fight Back.

Currently, Dafna Tachover is a senior attorney and director of the 5G program at Children’s Health Defense.