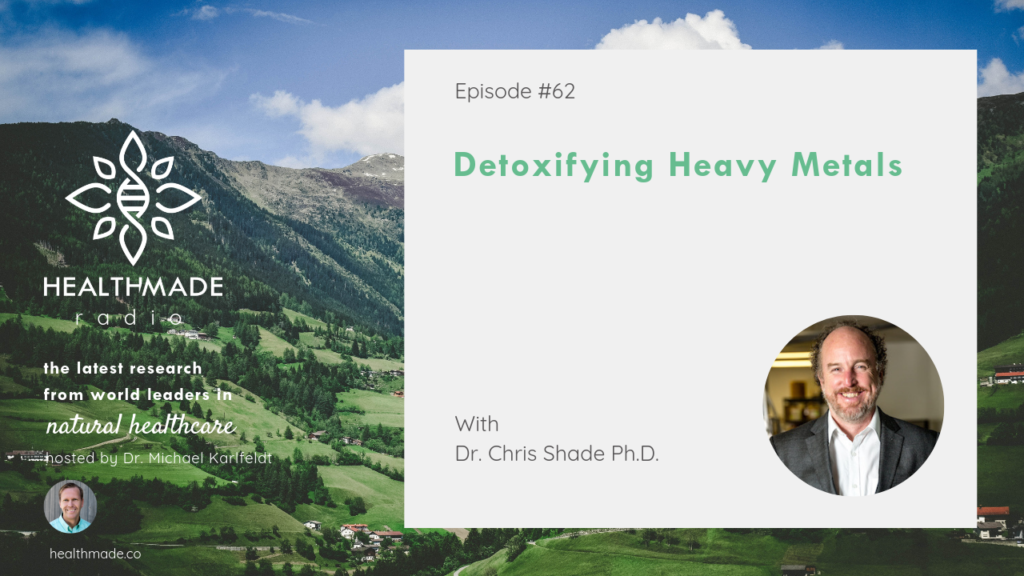 Dr. Chris Shade is a leading expert in heavy metal detoxification. He has personal experience with heavy metal toxicity, which merged with his professional interest. He was born in Bethlehem, PA, which has one of the biggest steel mills in North America. He also received 17 mercury fillings when he was a child and was exposed to mercury at work as an adult. When pursuing his PhD in environmental chemistry, he ended up working with a professor who was studying mercury. That’s when he became aware of how much mercury his own body contained.

He tried the traditional pharmaceutical chelation method (DMSA) which ended up worsening his health instead of improving it. So, he started researching how the body is naturally designed to detoxify, and how we can safely support those pathways without overwhelming them. This eventually led to the founding of his company: Quicksilver Scientific.

Most toxicity has developed through chronic exposure over the years from multiple sources, and a reduced ability of the body to keep up with demand.

This episode Dr. Michael Karlfeldt and Dr. Chris Shade discuss on the importance of lining up all the drainage,and the phases of detoxification in this order; the gut, then liver and finally the cells.

Sometimes when you start a detox protocol (whether through diet or supplements), your blood levels will show an increase in heavy metals before it decreases again. This is a sign that your body is liberating toxins (microcosm) faster than they are being filtered out of the body (macrocosm).
Its important that the pathway out of the body is clear before trying to detoxify the metals and environmental toxins.

Both stress and leaky gut interfere with detoxification and filtration. And when leaky gut is present, a leaky blood-brain barrier can also be present. That means that when toxins are released into the bloodstream and not filtered out, they can affect brain function.

Bitters as opening up the bile, tonifying the kidneys, and restoring ileocecal valve function. Dr. Shade discusses how the bitter detoxifier in ayurvedic medicine, GIand blood mover in Chinese and ayurvedic medicine, and strong antimicrobial. Dr. Shade tries to strike a balance between pushing detoxification enough to get results, without backfiring into side effects and negative symptoms. One key element in his protocol is supporting bile flow, which is often missed in other detox protocols.

THE CELL IS THE FINAL STEP IN DETOXIFICATION

Other important factors in detoxification:

It’s impossible to live a life where you are never exposed to heavy metals, and it’s impossible (and unnecessary) to get them 100% out of the body. Perfection isn’t the goal. Instead, the goal is to eliminate major exposures, consciously reduce stress in your environment and support our body’s ability to detoxify smaller exposures so they don’t negatively impact our health. We can develop resilience and resistance to heavy metal toxicity.

Caution: It’s good to work with a naturopathic practitioner when trying a metal detox protocol and supplements, because they can filter out beneficial nutrients and medications as well.  So, they need to be used cautiously with this in mind, and are only meant to be used short-term.

Born in a toxic steel town, Dr. Shade created Quicksilver Scientific to combat the environmental toxicity he personally experienced. Inspired by philosophy, guided by science, and driven to create, he patented a mercury speciation diagnostic process to analyze human toxicity. In addition, he created Quicksilver Delivery Systems® nanoparticle technology to increase the bioavailability of supplements and protocols leading to higher efficacy products without the prick of a needle.

For more than a decade, Dr. Shade has worked alongside practitioners to fine-tune a system and its applications to restore, maintain, and advance health. To this day, Dr. Shade develops all of our products and protocols and leads the R&D team at Quicksilver Scientific in both our lab and testing facility. Dr. Shade is regularly sought out to speak as an educator on the topics of mercury, environmental toxicities, neuroinflammation, immune dysregulation, and the human detoxification system for practitioners and patients in the United States and internationally. He has helped corporate executives, professional athletes, celebrities, children with autism, patients with chronic immune disorders and more. He strives to evolve the way the medical industry delivers care, and he is perpetually broadening the way the world understands health.

Quicksilver Scientific is a leading manufacturer of advanced nutritional systems with a focus on detoxification. We specialize in superior liposomal delivery systems and heavy metal testing to support optimal health. Our advanced liposomal supplements are highly absorbable, and support the body in the elimination of ubiquitous toxins, enabling you to achieve your genetic potential. At Quicksilver Scientific, we are passionate about health and well-being, and are committed to improving the lives of everyone we touch.

This article originally appeared at: https://healthmade.co/detox-heavy-metals.